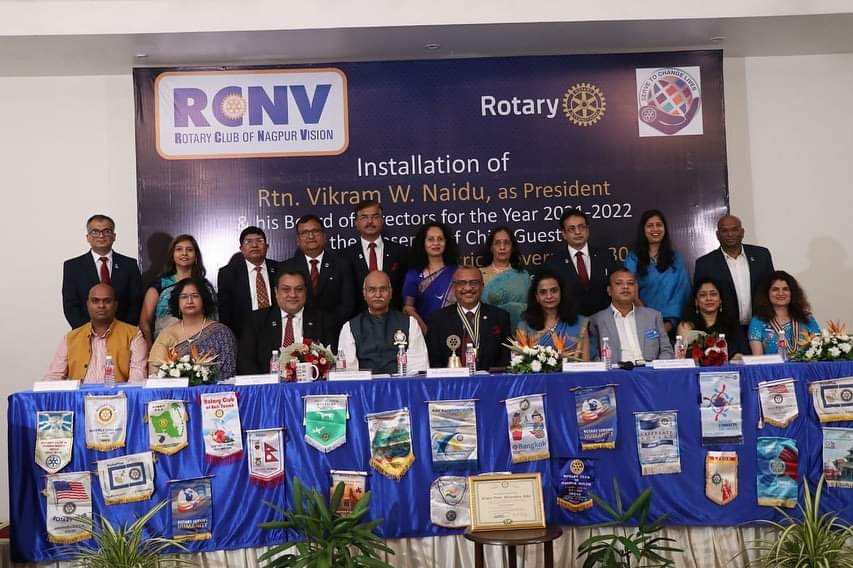 The Installation ceremony of President Vikram W . Naidu was held on July 16th at 11pm at Tamarind Hall, Chitnavis centre. July 16th is also the Charter day of the Rotary club of Nagpur Vision.
The installation program started with a beautiful rendition of the Ganesh Vandana by Rtn President Elect Shivani Sule and Rtn Dr. Shanthala Bhole. Ipp Jatin Sampat read out his report for the year 20-21 and announced the annual awards. President Rtn Vikram Naidu was installed by outgoing President Rtn Jatin Sampat . He was introduced by prominent businessman of nagpur Mr. Kumar Kale . President Vikram gave his acceptance speech and installed the Board 21-22. The board was introduced by Rtn Shantala Bhole and Rtn Deepali Hussain . The prospective new members were introduced by President Elect Rtn Shivani Sule . Assistant Governor Rtn Mahesh Lahoti introduced the District Governor Rtn Ramesh Meher.The DG addressed the audience and urged to concentrate on increasing the club membership , Public Image and continue doing the good work for the downtrodden and upliftment of the society and praised the clubs flagship projects. The hard copy of the Vision Magazine for the month of July 2021 was released by the DG . Hon Sec Rtn Jaishree Chhabrani informed about the next week’s projects and gave the Vote of thanks . The cake was cut to celebrate the Charter Day .
The ceremony concluded with the rendering of the National Anthem followed by sumptuous lunch .